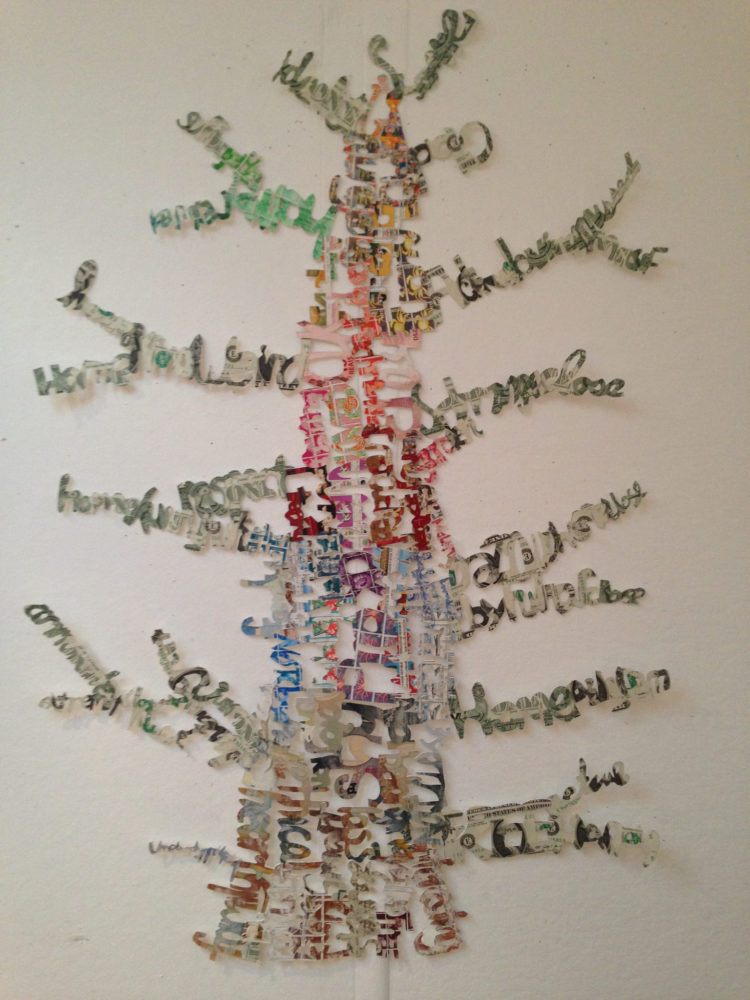 In actuality, this has another, much better name, made up by Miss Chadderton’s fourth grade class in 2015. The artwork was won in a raffle for a pound and is now gone and I don’t remember the name. Poetic Family Tree is the gist of it.  The artwork reflects upon this fourth grade classes nationalities and their grandparent’s nationalities.  Each child has chosen a word for each country they have a nationality to reflect how they feel about each of those places.  The students or teachers then had to think deeply as to how their grandparents related to whatever their nationalities might be. There were four grandparents to think about.  The students wrote each word in attached bubble writing so that I could cut it out.  In the end, each child had at least five, and usually more words, because lots of people seemed to be from more than one country.  I then glued ideally money, but sometimes stamps when it was impossible to get the money, and shaped them into the words.   I played with the words, shaping them into circles, spirals, squares, blobs, triangles and trees.  Although it is a little trite, the children chose the tree which, in fact, was by far the right one to choose.   It was interesting to see how many children have completely different backgrounds from their grandparents.  It was also interesting to see how totally international we all were. It was inspiring to literally see all these different kinds of people making up this tree.  The words were also varied: sometimes deep, sometimes not, but usually different.  In the end, the writing has the gnarly quality of bark and leaves, so in many ways, it felt like a visual onomatopoeia.  It was framed in between two pieces of glass to accentuate all the holes and shapes.