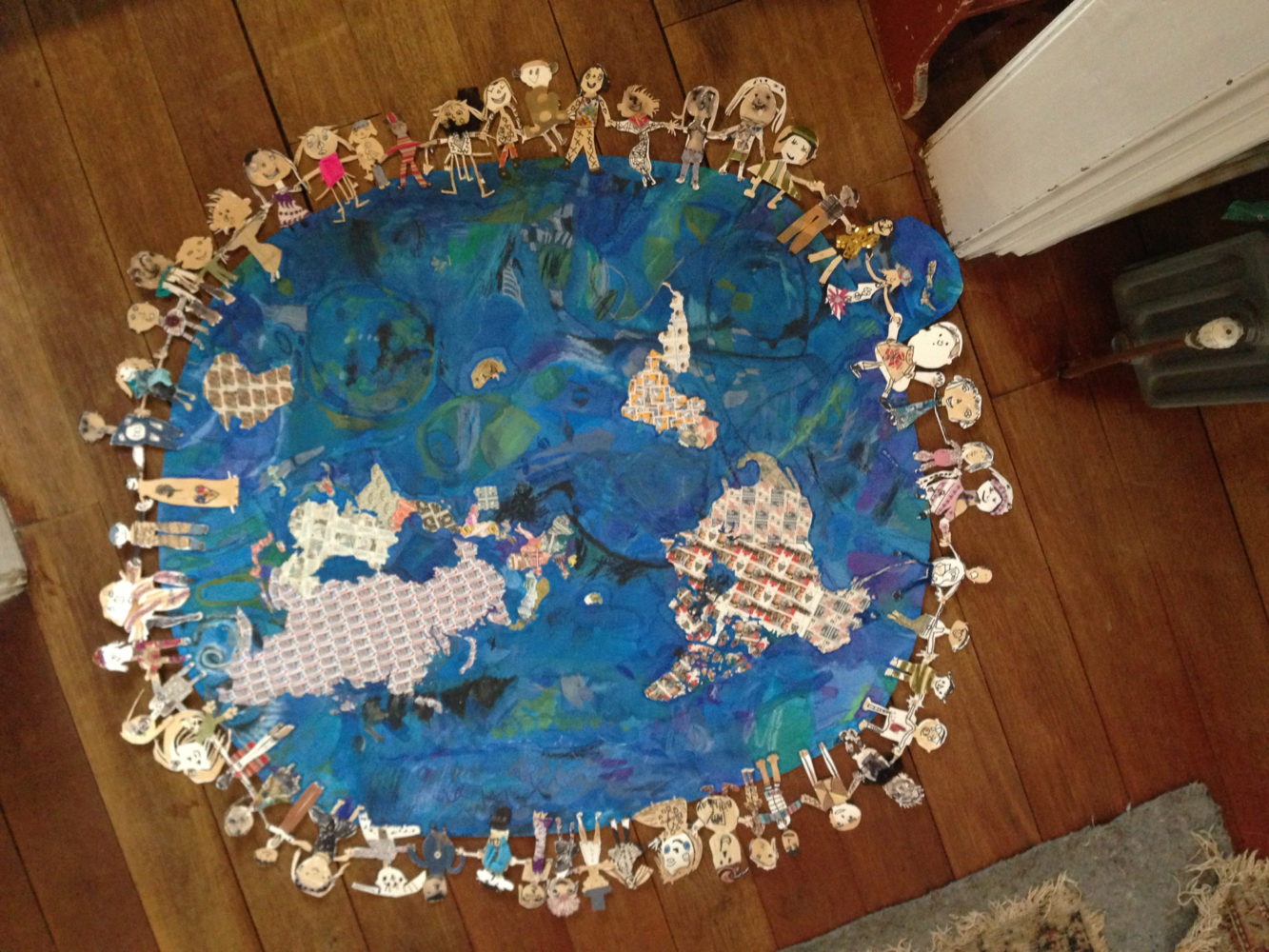 This is an example of an artwork which started with a small idea and became an enormous undertaking.  It was the first artwork that I made which I incorporated the children’s drawings.  Biannually, the American School in London has a massive fundraiser.  Each lower school class is expected to contribute an art project or “basket” for a big raffle.  I was very busy with Jacob who was still at home in nursery school, but I love Holly, Noah’s kindergarten teacher so much, I couldn’t say “no” when she voluntold me that it would be great if I did the class project.   First the children and I spent days filling in a huge sheet of paper with blues and greens and purples to make the ocean of our world.  This was very ugly, so I had to ink over the whole thing in blue which made it quite beautiful, despite the fact that it sort of destroyed all the work of the children.  Then I collected stamps from every country represented by ASL students.  I glued them together by country and then cut them out in the shape of that country.  In the end, I made an ASL world with all the rest of the countries in the real world left out.  It still has pretty large representation with 65 different countries.   This was a nice looking project, but it was definitely too cold and lacking something.  I decided that the best way to show the children was to use their self portraits which are so honest and pure and not self conscious.   I photographed every black and white ink self portrait from all the kindergarten classes and xeroxed them all a little smaller than they were.  Then, I cut them all out and used that outline to cut out the same person shape on a thick piece of Moulin du Gué paper.  I then brought these outlines back to Holly’s class. Each child was given a couple of outlines and they redrew hair, faces, clothes, fingers etc. and added coffee stain to give a little depth to the people.  They were also given a selection of fabrics which would be the “clothes” for the person.  I took these fabrics and sewed them onto the people and then Holly and I and some other mothers sewed these fifty something people around the earth.

Had I done this kind of project before, I would have been much more efficient.  I did learn to be so, with the consecutive two that I made.  I also would have been more efficient if I were skilled in the land of the digital.  However, this is not my style.   I am long winded.  Messy hands and mistakes and round about ways make my artwork what it is.

In the end, this artwork was HUGE.  Someone won it for £1.